I'm taking a bit of a work break (I also have my articles lined up for my end-of-the-year All-Star teams, but it's too busy workwise to post, but I'll get there) because I received something in the mail directly from the Topps Company.

Allow me to explain.

As you know, my last post on this humble, little blog, was a call to get as many Dummy Hoy and Curtis Pride cards from 2015 Topps Update Series Pride and Perseverance set. As soon as it was announced that Hoy and Pride were going to be added to this set, I sent word to a couple of people who I thought would be interested in this.

Among them is Steven Sandy, a researcher who has been one of the main proponents in getting William Hoy enshrined into Baseball's Hall of Fame. Sandy said that he had tried to get Topps to do a set of cards on Deaf players and was surprised that they would include Hoy in the Update Series. After expressing his opinion that Topps should have added more Deaf players into the set, I explained to him that he's only there as part of an insert set, and not the base set (did I forget to mention that Mr. Sandy is Deaf?) I did suggest he come up with a series of cards featuring Deaf players, something he's wanted to do for some time. Maybe get together with Gallaudet University? Who knows. Can't wait to see what he comes up with.

Anyway, my tweets reached every Hobby blogger's favorite Topps employee, Susan Lulgjuraj, aka Sooz, former Becket sports editor, also a SCBR Hobby Blog Hall of Famer (A Cardboard Problem for those who weren't aware that she wrote a blog before joining Team Topps). After asking me to DM my address to her, she said she'd send something my way.

Well, it's Halloween. And it looks like I got a treat: 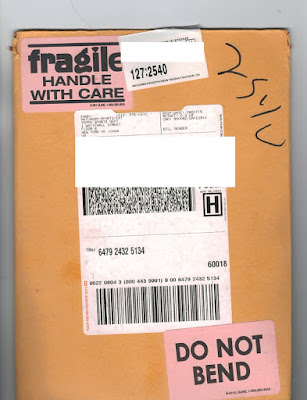 Let's see what's inside, shall we? 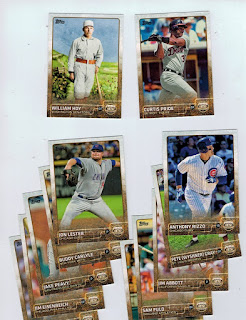 It's a complete set of Pride and Perseverance!!!

Whoa!!! This is an awesome surprise.

This set has been getting a lot of positive press from sources outside the Hobby media since Update Series came out a couple of weeks ago. Very interesting story on how this set was conceptualized. You can check here or here, but it looks like in 2014, "the Professional Baseball Athletic Trainers Society (PBATS) proposed a special card series, featuring players with disabilities, within Topps' 2015 set." And Topps did well with this set.

A brief summary of what obstacle (disease, disability, Deafness) each person overcame to achieve their dreams of reaching the Major Leagues is included on the back of each card. How cool would it be for a kid, or the parent of a child, with similar circumstances to open a pack of cards and see that even baseball players had their own adversities as well?

Sooz, thank you so much for the cards. This definitely was one of the best things I've received in the mail in quite some time.

Nice job by Sooz! Congrats on getting the set so early!