So Here's What's Been Happening While I've Been Gone 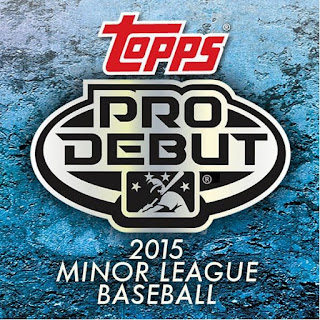 The set arrived on Friday, and after reading through 200 biographies of players who are now rookies in 2015 and those biding their time, waiting for a shot at the big leagues, I placed the cards in sheets. I now am the proud owner of every Topps Pro Debut set since the Company was awarded the license to produce MiLB cards in 2010. It's a nice supplement to the basic set as Topps incorporates that year's eponymous (there's that word again) design with minor league team logos.

These are the real prospect cards as they feature players in their minor league uniforms, with all of the great minor league team names (Tin Cups, Chihuahuas, Ports). These are the ones that actually count as base set cards. Those Bowman Chrome Prospect cards that a handful of collectors still believe are Rookie Cards (because they depict the player in the clothes of their big league affiliates)? They're not rookie cards. They're inserts. That's what they've been since 2006. It's easy to say, "get over it," but it's been 10 baseball card seasons since the big overhaul. If you the collector haven't by now, you never will, and that philosophy will never go away, so no sense in arguing about it.

I noticed something different about these cards compared to their major league counterparts.

They're not completely glossy. 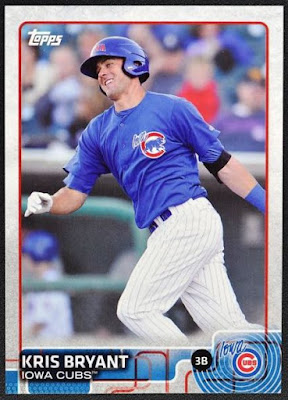 Only the player depicted on the card and the border is covered in gloss. The rest of the picture (the background) is matte finished. Okay, so you can't tell based on the scans, but look at them up close, and you'll see what I mean.

Not since 1997 Topps have I seen anything like this (I'm guessing).

Coming into today (June 8, 2015). Twenty-four players in this set have already made their major league debuts, and a 25th is making his MLB debut tonight (Carlos Correa of the Houston Astros). That's 1/8th of the players in this set. Most, if not all, will eventually show up with major league cards in either Series 2 (which is coming soon...excited yet??!) and the Update Series (with 400 cards in this set...they better...more about that later).

In the mean time, the Royals have seven players leading the 2015 All-Star Game balloting. Do you think the commissioner is going to step in? It's like 1957 all over again, when fans of the Reds (who coincidentally are hosting this year's gig) placed seven of their players as starters but were over-ridden by Ford Frick.

I'm still biding my time, but the goal is by the All-Star Game that I'll have the Series 2 cards and the Team Sets in hand and in binders. You know how it is around here during All-Star season (which runs from when the rosters are announced until the end of the game).

There is one more thing I want to write about, but I need to double check with the guys running it first before I can make the announcement here. They may have already made their announcement, but I haven't seen anything yet. Without spoiling anything, let's just say that if you're wondering why the Baseball Card Cyber Museum hasn't included images of the 2015 Topps Cards, Joe has them, but...

That's it for now. Time to go online and do some price comparisons.