On Friday, I went to the local big box store, hoping to find packs of 2015 Topps Series 2.

But I did find the 2015 Topps AL All-Star Team Retail set, so I bought that, and two packs of 2015 Topps Archives.

Now I'll be honest, I've been really disappointed with Topps Archives since the concept was brought back in 2012. Not because of the cards themselves (I do have the 2012-2013 sets in my collection), but because it has lost its focus. It has become Topps Heritage Lite honestly.

I know there are restrictions to what Topps can produce regarding products with retired players (which is probably the only thing I didn't like about the deal that was made in 2006), but creating cards of current players in designs from that were already used in Topps Heritage is very uninspired. Even the "Fan Favorites" subset, which was the only thing good about this product (for me anyway) became a letdown in last year's product when you added current players to the SP mix.

The autographs, with the faded in section so that players can sign on-card, turned me off. The ATFF's were probably the only autographed cards I actually look forward to trying to get, especially if the subjects weren't part of the base set.

But I'm glad to see that Topps repeated the things I didn't like for this year's Archives set (end sarcasm). It's probably why I wasn't motivated enough to buy a set last year, save for a few packs. And after looking at today's cards, I'm just as motivated. I may come around...especially when set prices fall dramatically about a year or two later. 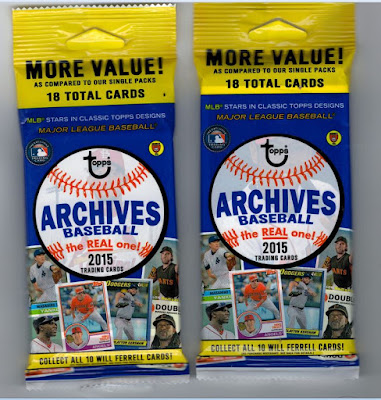 So what did I get in my pre-Father's Day packs of 2015 Topps Archives? Here are the results:

Pack 1:
Nothing much to write home about here. You know you're old when even the Sell Sheets are "honoring the 25th anniversary of the 1990 Topps set." Don't get me wrong, the cards look nice up front, but to me it seems like I'm looking at previews of Topps Heritage cards. Bring back the good old days when you're featuring retired players in the designs that make sense (Whitey Ford in a 1983 design...REALLY??!)

Pack 2:
Pack two was the absolute winner between the two. Any pack that contains Babe Ruth, Roberto Clemente, Johnny Bench, and six other Hall of Famers, plus two Cubs cards AND a Bryce Harper insert makes this a very loaded pack (okay, most are base, but come on now...four out of the first five cards were of Hall of Famers).

Thinking of putting the Harper card on the Bay, possibly the Soler too. All cards are up for grabs though...make offers or take them off my hands.

But it's Father's Day. This morning, my beautiful wife and two fantastic kids made a huge breakfast and even went to Starbucks to get me a Frappuccino.

While my family was at church to witness the baptism of my nephew Charlie, my in-laws were out in beautiful Crown Point, Indiana, to honor the patriarch of the family with a barbecue. Beautiful day for both events. It's the longest day of the year, no less...so the sun should be up until what 9 pm tonight? And the Cubs won (and those guys from the south side did too apparently). So all in all, a great day.

Good to see some childhood friends today. I hope to see them again tomorrow as they encounter a Chicago Deep Dish Pizza for the first time ever. Trying to convince both to come down to my neighborhood for a killer burger before hand though, but we'll see how that goes. 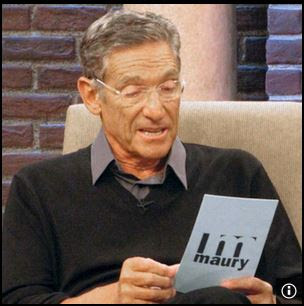 "Anyone can be a Father, but it takes a special man to be a Dad!!!" - Maury Povich

Until next time, America.

"I hope to see them again tomorrow as they encounter a Chicago Deep Dish Pizza for the first time ever."

Or, as it's properly called: pizza

"Bring back the good old days when you're featuring retired players in the designs that make sense (Whitey Ford in a 1983 design...REALLY??!)"

Of all the complaints that are routinely leveled at Archives, this is the one that I just don't get. At all. Oh, you're not alone (and perhaps I am). But I can't even conceive of the thought process behind this particular complaint. So let's say they put Whitey Ford on the '57 design. Why in God's name would I want that? There's already a '57 Whitey Ford in existence. If I wanted a '57 Whitey Ford, I'd want the real one, not the knock off. OK, so maybe somebody can't afford an original '57 Ford. Leaving aside that there are already reprints of most of the old stuff, having a bogus '57 Ford (even with a different picture) would just breed resentment in me that its not the original.

I would much rather see players on designs that weren't around when they played, either because they came after they retired or they were done before their debut. An '83 Whitey Ford? Hell, yeah. That I can get behind. That's gonna look cool in my collection. Another '57 Ford? Why? Feh!

I know everybody remembers the original Archives so fondly and, yes, I miss the heavier card stock, too. But such a product could not run more than a couple of years without becoming A) predictable and boring and B) impossible. Those early sets focused on rookie year, peak year, and final year designs for the subjects involved. Where could you go after that? How many '57 Fords could you stomach? Or maybe you'd prefer faux cards for every year of their major league careers. But why? Those cards already exist. And given the choice between a box of that kind of Archives every year or a legitimate vintage card of one of the featured players, I'd rather go vintage. But I'll buy a box of Archives to see Ford on an '83 and Dilson Herrera on a '57. Because there are no other '83 Topps design Whitey Fords or '57 Dilson Herreras except in Archives.

I agree with STUBBY. I enjoy being able to see some of the older players on different designs.

I found your blog through the Trading Card Database and I'm always looking for trading partners. I collect Topps main set as well as update, Heritage, and Archives. My collection is focused on collecting Diamond Kings from the 80s & 90s.

Check out my blog and let me know if you'd like to do a trade sometime!