I Finally Have It! My Carabao!

After a year of searching, it only took less than 15 minutes at the National Sports Card Show before I finally found the one card I needed...no...WANTED from the 2010 Topps Allen & Ginter. 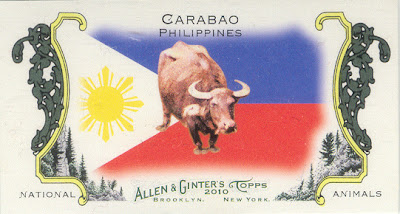 That's right, ladies and gentlemen. I don't have the master set of 2010 A&G yet (and if you've looked them up on the Bay, they're getting pretty cheap), but I do have this beauty.  It goes well with the rest of my "Topps Loves the Philippines" mini-card insert set collection (which includes the Flag from 2007, former President Gloria Macapagal-Arroyo from 2008, and National Hero José Rizal in the 2009 A&G product).

Now I heard there was a 2011 mini card featuring another animal from the Philippines, this time from the Animals in Peril insert set: 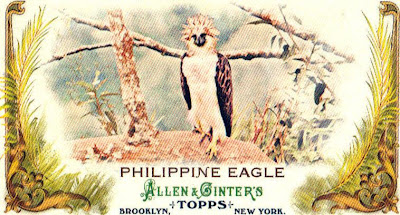 This is card #AP15, the Philippine Eagle.  I actually would have called it by the name I knew it as, the "monkey-eating eagle," but this works too, I guess.  And although it's not part of some National/Country kind of insert set, it is something I would have wanted...if I could have found it!!!

My daughter, who did come to the show with me on Friday, did snag the Giant Panda card that is now proudly on display on her front door (she has one of those picture hanging things...it's okay, she didn't glue it on or anything).  But I didn't find this card.  And now I want it.

So if anybody has it, please let me know.  Thanks.

Later on this week, I'll put on my review of the show.  With pictures.  I promise.

JayBee,
I love your idea with the Topps 300. I am kinda jealous and might try something similar on my page... I also like your collection idea for the Philipines related cards. Send me an email when you get back from the National. I have the monkey eating eagle mini and would be glad to send it your way... Cheers!
troll
bacontowne at yahoo etc