Topps Insert Set of the Week: 2006 Topps Signers of the Constitution 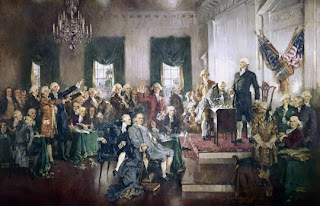 Today is Constitution Day everyone, and I was only made aware of this because my daughter told me she was going to play George Washington in a class play about the Constitution. So that led me to start thinking about what to put on this blog (I haven't written anything since Saturday), and I thought I'd do a post on the 2006 Topps Signers of the Constitution set as a way to return the "Insert Set of the Week."

Inserted into packs of 2006 Topps Series II baseball (1:8 hobby, 1:6 retail, 1:4 HTA) were cards from a 42-card set honoring the men who ratified what we know today as the US Constitution. An appropriate sequel to the wildly popular 2006 Topps Signers of the Declaration of Independence, this set also uses John Trumbull's "Declaration of Independence" albeit a closer (and colorized image) part of the painting. Below the painting was the name of a man whose signature appears below this historic document and a small headshot of each person on the bottom right corner of the card. The back of each card is a puzzle piece, and when you get all 42 cards together, you have (hoping that all cards are reasonably centered) a copy of the Constitution (seven cards across by six cards down), suitable for framing (or whatever you want to do with the cards...)

There were 39 men who signed this most important document (and the checklist of the set itself) were:

William Jackson, the Secretary at the Convention, is notably absent in this set.

As much as a fantastic set this is, they could have used a different painting for the front of the cards. Realistically, they could have gotten the rights to use Howard Chandler Christy's "Scene at the Signing of the Constitution of the United States" as it would have been more appropriate based on the theme of the set. And like with the Signers of the DOI set, I would have preferred to have a quick bio on each of the signers (some of these men were part of the DOI set too), and why they were there instead of a small picture of each person.

But it is a great set regardless, even if it was included in a baseball card product. For history buffs, this is a must have (no word yet if my daughter bragged about her daddy owning a full set yet). Yes, they could have done more with this set, but as it was, each man is now remembered and immortalized permanently on Topps cards. Sets are hard to come by, especially because of the number of cards in the set. But "commons" can be found at reasonable prices (okay, most under a buck) at shows, shops and on the internet.

I hope my daughter had a good play today.

JayBee Anama
Posted by James B. Anama at 4:29 PM

Great post- thanks for highlighting these cards! I got back into collecting because of political/historical cards, and actually just completed both refractor sets of the Declaration and Constitution cards yesterday.

JayBee-thanks for highlighting this insert set. I recently purchased the Declaration of Independence set, without even knowing that the backs of the cards were a puzzle! I hope to pick up the Constitution set as well. I agree with you though, that the cards themselves could have been a bit more personalized.

I enjoy collecting these historical sets, and I really enjoy the American Heritage sets because those cards are very informative and interesting.