Before going on my long hiatus from card blogging, I wrote about my thoughts regarding the Derek Jeter reprint set that Topps was going to include into its 2017 Topps Archives product.

As we all know, Topps created reprint sets in the past, honoring legendary players such as Mickey Mantle, Willie Mays, Roberto Clemente, Nolan Ryan, and Hank Aaron, with reprint sets of their respective baseball cards. Jeter was included in such a set for their 2015 Topps Update Series product. But there were frames, and parallels, and for whatever reason, trying to get a complete set of reprinted Jeter base cards was not something I was planning to do, especially since...well...I have all of his regular cards. Why would I want to spend money on reprints that were being sold for more than the base cards??!

I was waffling between going after the reprint set that was part of Archives, even if I had no intention of going after the actual Archives set. The Jeter reprint set was to consist of 23 cards (1993-2015), with three cards being short-printed: the 1993 Rookie/Draft Pick card, the 2015 final card, and that infamous 2007 Jeter card with Mantle and President Bush photoshopped into the picture. As it turns out, Topps never did include the 2007 card as part of the base set (there are autograph copies out there somewhere apparently...). And yes, there are parallel cards based on the color of the foil used for the DJ logo. So the most basic set consisted of 22 cards, including the two short-printed bookends.

Well, in my hunt for cards on the Bay, I did find a Jeter set in my price range (anything under a hundred bucks...which some of these sets were going for). And... 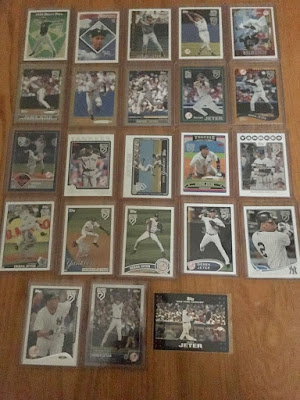 The guy I bought this from was nice enough to throw in a 2007 Jeter card anyway to make it feel complete. Even though this is not part of the official Topps set (it is part of Archives, after all), I am adding these cards to the big 2017 Topps binder. I might seriously have to buy a second binder for all of the insert sets before the Update Series comes out later in the year.

Now that I am taking a bit more of a proactive role in maintaining the Sports Card Blogroll, it's time once again to remove blogs that haven't been updated after six months of inactivity. While my humble, little blog was almost on the edge of that cliff, I'm happy to be back blogging a bit more frequently.

So this time around, two blogs will be removed from the Sports Card Blogroll:


Removing these two sites from the big blogroll brings the site down to 221 active blogs about the Hobby we all share.

So as always, if you, or someone you know has a blog about sports cards, please send me an email, or drop me a line on Twitter.

That 2015 Jeter is one of my favorite cards of the last five years. Simply beautiful.