How My National Trading Card Day is Going

So today is officially National Baseball Trading Card day. Most baseball card shops here in the Chicago area are not open until after 11. I did find one about 10 miles away from my house that opened at 10, so I went there first.

Funny thing, but as soon as I pulled into the parking lot the guy that I guess owns the store just unlock the doors to the place. So I'm going to just sit here in the parking lot for about another 10 minutes so doesn't look like I was just casing the place before he got there. Another family looks to have just walked in. So maybe I'll go now. Stay tuned for more updates as I let you know how my day has gone so far.

While customers at the shop do not really need to buy anything to get the free pack of NTCD cards, you should be courteous and buy something to make it worthwhile not only for the store you are visiting, but also for yourself. You never know what you'll find in the shops you're going to today. 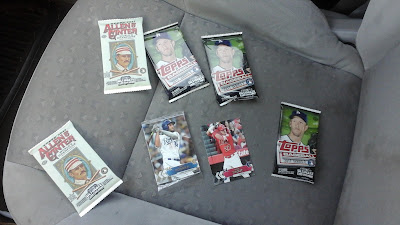 The store I just left was selling packs of 1986 through 1991 Topps baseball cards. Six packs for $5. I wound up buying three packs of 2017 Topps Series 2 and two packs of this year's edition of Allen and Ginter's. So not only did I get my free pack of cards, I also received the Mike Trout exclusive which was what you'd get if you bought $10 worth of product. I am going to one more store before maybe heading home, or I might go to another one. I don't know yet. I still have a few hours left before picking up my kids from band, so I'll just hit the road some more. jba

Just left the second card shop now. There were more kids in this store this time probably because it's after 11. It's great to see kids coming out to the shop that's what this Hobby needs. The more kids that come out today, my hope for the future of this Hobby grows. 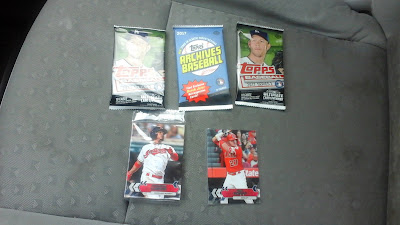 So in any event, I wound up buying one pack of 2017 Topps Archives and two more packs of the 2017 Topps series 2. So now I have two Mike Trout cards, and I have some options. Maybe sell it on eBay to get to recoup my funds from today. Maybe do a Twitter giveaway? Hold on to it perhaps? I don't know. The next store I go to, I will not buy $10 worth of stuff to get a third Trout card. If the idea of this event is to get the kids out no sense in me trying to get as many of them as I can. On to the next. jba

Went to the last store I'm going to go to today and I only have 20 minutes before picking up the kids from band. So this will be the last stop for me. The third shop is inside a shopping mall. And while it was quiet when I went inside, the gentleman behind the counter said it was pretty busy from the time he opened. 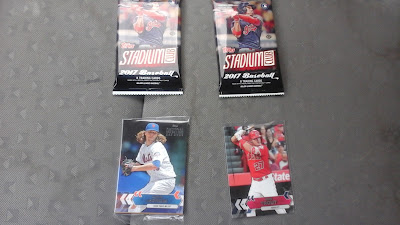 The original plan was to go get a pack and then call it a day. I also was going to get just a box of sheets but the price was too high so I nixed that deal. So instead I bought two packs of the 2017 Topps Stadium Club, and that apparently gets me a third Mike Trout card. Yeah what happened to being generous to the kids??! Well the guy said if I bought $10 worth of stuff, I'd get a free Mike Trout card as well. I wasn't about to tell him I've already been to the two other stores, so now I have three Trout cards.

I definitely will now have to find a way to give these cards away. Maybe I'll send a trade request after I go through what cards I got from baseball card trading day. I have 3 packs of those so I should have 15 cards from the set today. I'll post my needs and any extras I have later this afternoon. And in the spirit of the day, I might have to make some trades.

Thank you following me on my card adventure today. Hope you had a good time. As I said I'll let you know what I got later today. jba
Posted by James B. Anama at 10:24 AM

Must be nice.. lol
The one store we had changed ownership and now is solely focused on board/card gaming.. If I wanted to get anything for today I'd need to go to Toronto and navigate the maze of streets by myself.. Nope.. lol

Three card shops in under a few hours... Wow. I need to move to Chicago.
Thanks for sharing your day!

You have three card shops in your area? Nice. I'm down to one... but wasn't able to make it there for National Trading Card Day.