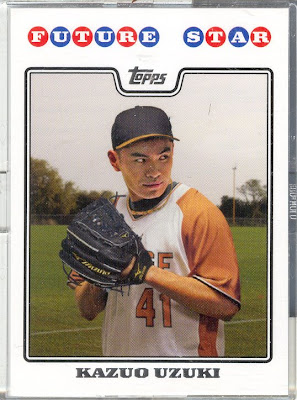 JayBee Anama
Posted by James B. Anama at 8:30 AM

Email ThisBlogThis!Share to TwitterShare to FacebookShare to Pinterest
Labels: 2008, commentary, topps, WHAT?

Depending on the kanji used, Kazuo Uzuki could mean "first son of April".

Uzuki can be "卯月" which means April, sort of. It's the traditional term that doesn't get used anymore, and refers to a flower.

And Kazuo can mean "first son" with several kanji: 一雄, 一夫, 一男. It's a relatively common given name.

一 means one or first. 雄 means male, 夫 means husband, and 男 means man. So it does make sense.

I wrote about this card at my school for this month's article, and I picked one up for myself a year or two ago too. I'm glad Topps enjoys tossing in fun "gimmicks" like this sometimes.