I brought my daughter to the Sun-Times show on Friday night.  I told her as we were walking down the aisles of the show that she has been with me to many card shows...even when she was just a baby.  In fact, I think we took her to a card shop before heading home from the hospital that first night we brought her home (had to get those last few cards from 2000 Topps that were saved for me).

It was easier when she was younger.  Her favorite player of all-time is Derrek Lee.  She even did a bio on him for a writing assignment at school (with visual aids aka my entire D-Lee card collection up to that point).  She collected cards that she thought looked nice, and even the dealers at shows she attended would give her free cards.  I even remember that day at the National when the eTopps booth (not Topps, eTopps) when we were able to nab a ton of 2008 ToppsTown cards (they were just sitting there...really).

Alas, she's growing up.  There are other things that have taken precedence in her life over baseball cards.  Now she looks at her dad as a big card geek.  It was inevitable.  Between dance (she made the big dance troupe from the park district in the fall), band (she's a percussionist in school...love the picture of her with the drumsticks), newspaper (the sixth grade "supereporter") and the usual middle school schedule, her life is pretty busy as it is.  Baseball cards have rightfully (and sadly for this dad) have taken a back seat.  Maybe she'll get into it again, if only as a reminder of how she and I bonded all those years ago (I'm almost in tears writing this...)

Besides baseball cards, it turns out that my daughter is a fan of the ghost hunting shows on the television.  While she likes the TAPS group on Ghost Hunters, she is a really big fan of Ghost Adventures.  Loves the show.  And I could only be proud of this because I love reading about REAL ghost stories (something I got from my mother so she's thrilled that her China doll loves these shows).

Now to the point of the title of the post.  One of the mini set themes found in 2011 Topps Allen & Ginter was called "Uninvited Guests."  It is a ten-card set of houses and other locations that have had infamous ghost sightings.  The backs of each of these cards even has a brief summary or two about what goes on at each location.  Perusing the checklist, it looks like either the TAPS or the GAC have been to almost all of these locations (save possibly the White House and Amityville).  Now at the National last year, we were able to find three of the ten cards in the set.  She was hoping to find the rest at the show last weekend.  Suffice it to say, we are now in possession (pun intended) of all but ONE of the cards, and it will haunt us to no end. 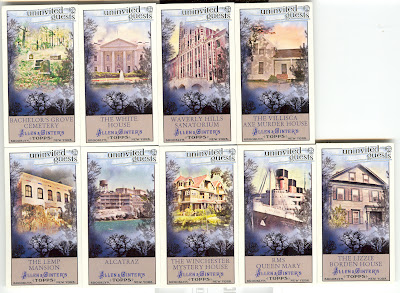 That is because of the ten cards, we are missing card #5 (or #UG5 The Amityville Haunting). 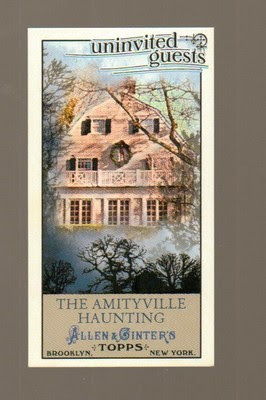 She also liked the look of the Ascent of Man set from last year's A & G and asked if we could make a go of completing the set.  Now, we had few cards from the National. And I had no idea until we bought more that these cards, when put together, create a 26-card long mural that begins with Prokaryotes and ends with Modern Man.  After buying what we could find at the show, we're down to the following cards to complete the set:
She likes the Allen & Ginter sets for what she calls "all the weird stuff that's there" (which includes the Revolving Door that she HAD TO HAVE).  She's looking for cards of Lucy, Area 51, Pluto, and other odds and ends (we'll get a list up soon...she has to see what's in all of the A & G sets first).

Now, if I could only help my son finish that Spongebob Squarepants Panini sticker book...

I got doubles of Amityville. I'll check for my dupes of the Ascent cards and send it out to you next time I hit the PO.