Quote of the Week: Mickey Mahler 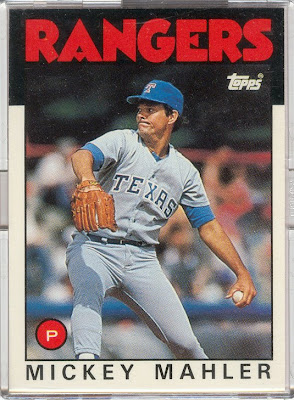 1986 Topps Traded Mickey Mahler #68T. Hey Mickey, if you were Commish, what would you want players to do???
(The quote of the Week was found in The Baseball Hall of Shame's Warped Record Book by Bruce Nash and Allan Zullo, taken from a USA Today interview with Mickey Mahler in 1986.)

In 1986, USA Today asked several players what one thing would they change about the game if he was the Commissioner of MLB for one day. Mickey Mahler, a journeyman pitcher then with the Texas Rangers, responded,:

"Every player who has played three straight years in the majors, I'd send back to Triple A for one month just to let them see what it was like so they won't forget how good they have it now."
This was a guy who after the 1979 season, only played in a grand total of 14 total major league games between 1980-1984. He resurfaced with the Expos and Tigers in 1985 before signing on with the Rangers in the winter of 1986. That means the rest of the time, he was toiling in the minors, waiting for that call-up to the majors. For two whole seasons, that call never came. It was until he joined the Rangers that he stayed with a big league team for a majority of the season. However, the next day after his name showed up in the article with the above quote, he was promptly demoted back to the minors and into Oklahoma City, the Triple A affiliate of the Rangers. His contract was then bought by the Toronto Blue Jays, and he finished his year and ultimately his career, in Canada.

Call it sour grapes, call it jealousy, but I think being in the minors for a long period of time got the best of Mr. Mahler. I think calling for every player who's been in the majors to go down to the minors once a month, sounds a bit harsh. It looks like the Rangers thought Mahler had a great idea because the next day, he was sent down to the minors.

"Every player who has played three straight years in the majors, I'd send back to Triple A for one month just to let them see what it was like so they won't forget how good they have it now."
Sincerely,
JayBee Anama
Posted by James B. Anama at 12:06 AM